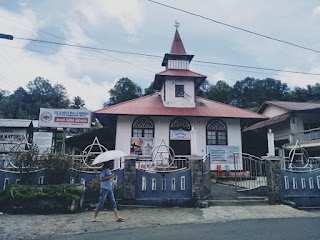 The current condition of GMIM Galilea Watumea which is the oldest church in Minahasa. (Gawai.co)

When visiting the location of the church which is in the Tandengan area, located in Watumea Village, the shape of the building from front to back still stands firmly, which even makes it more interested when entering the church and seeing firsthand the condition of the furniture in it. The conditions are still good, some of the heritage chairs are still in use today. 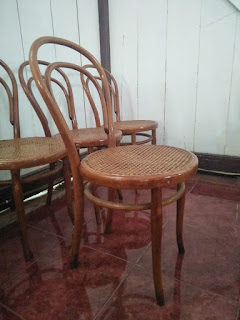 GMIM Galilea Watumea is the oldest church in Minahasa which began construction in 1868, was completed in 1872, and was ordained by Rev. Rooker on December 8, 1872. The ordination of the old church was attended by several Zending evangelists in Minahasa, such as N. Ph. Wilken, J. G. Schwarz, N. Graafand, J. N. Wiersma, and F. H. Linneman.

When viewed from the front of the old church, you will find a sign that says the GMIM Galilea Watumea heritage. The church building is almost entirely made of wood, and before it was replaced with zinc, the roof of the church when it was inaugurated was still made of thatch leaves, something that was very common at that time. 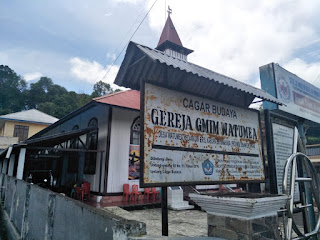 The main building of the old church is very pleasing to the eye, measuring 22 x 11 meters, standing on a land area of ​​528 m2. It is big enough for the size of a small village when it was first established, but it may feel like it will become increasingly cramped as the settlement develops. 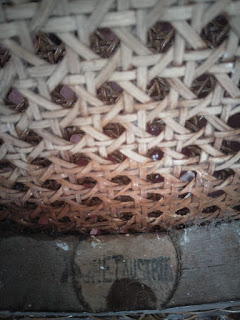 A note there says that the old church was restored in 1982-1983, and the inauguration was carried out by Haryati Subadio. At that time he served as Director General of Culture, Ministry of Education and Culture. 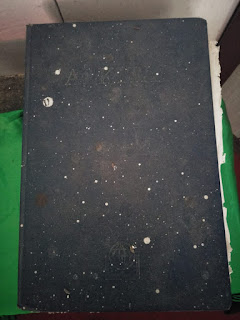 With its characteristic, the rooster ornament appears to be attached to the roof of the church which is also often found in other old churches. The ornament serves as a signpost and at the same time as a reminder or meaning for the people not to follow in Peter’s footsteps who denied Jesus.

Another interesting thing, this colorful glass ornament above the door was installed in 1924 and its authenticity is still maintained today.

To the left of the room right at the entrance there is a wooden staircase leading up to the roof of the church where there is an old church bell that was installed around 1912. The rattan chairs attached to the church wall are some of the 140 rattan chairs made in 1895 and are still in use today. and is made in Austria, it is about 126 years old. 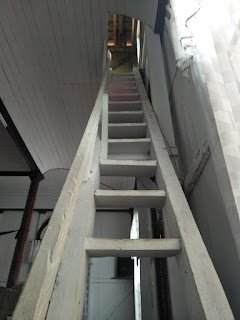 At the front / stage there is a platform in the shape of an angled cup and decorated with carved flowers made of chisels. This wooden pulpit is not new yesterday, it turns out to be more than 100 years old, because it was made in 1872, when the church building was dedicated. 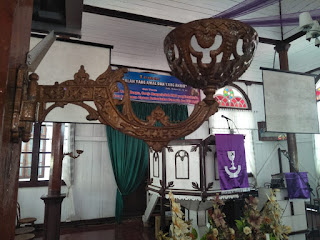 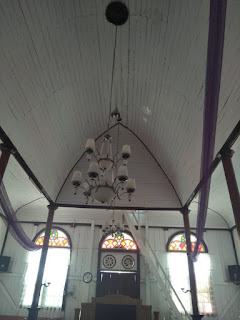 When GAWAI team met with the Kostor or called the church guard, Refly Pandoh explained that all the furniture in it was still original and had not been replaced. Suppose the rattan chairs are still in use today, even though there are several units stored in the warehouse because they are damaged. 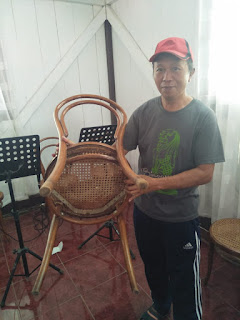 “The existing ornaments are still in use, except for those that are damaged and can no longer be used, we have stored them in the warehouse,” he said.

While the Chairman of BPMJ GMIM Galilea Watumea Pdt. Inneke Tulangi revealed that even the bells on the roof are still used to signify church entry, occasionally used for inter-denominational ecclesiastical activities, for grief, or for community activities. 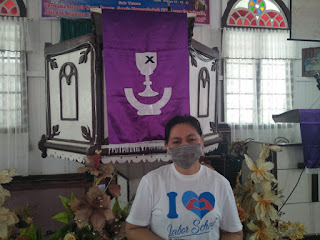 “Bells are used for all people, both grief, community activities and all groups use this. Including notification of activities from churches in Watumea Village, “he said. 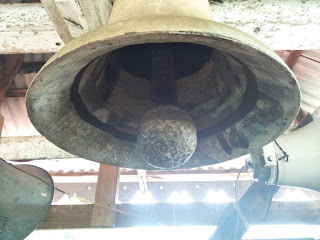 “Despite the current covid-19 pandemic constraints, it is still being used. What is certain is that until now we are still using this church building as it should be,” he said. 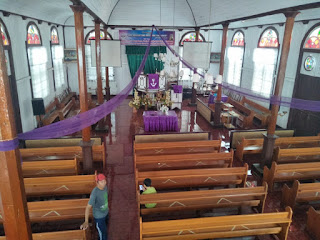 Tulangi said, if there is anything that needs to be replaced, we will convey it to the relevant government, especially those responsible for this cultural heritage.

He explained, related to the naming of the church, perhaps because of the proximity of the old church to Lake Tondano, so that it was given the name Galilee.

“Maybe the village elders at that time named Galilee because it was close to a lake, so the name was like that,” he said jokingly.

He also hopes that the GMIM Galilea Watumea congregation will receive special attention from the local government, namely the Minahasa Regency Government. Because according to him, this old church building is different from the others, because it is a cultural site and historical heritage in the land of Minahasa. 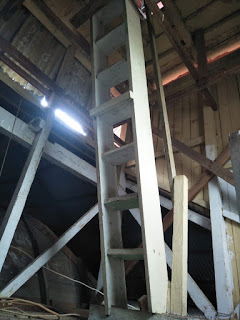 “At least there is assistance that can be felt by the Watumea community from the Minahasa Regency Government,” he said. (Gawai Team) 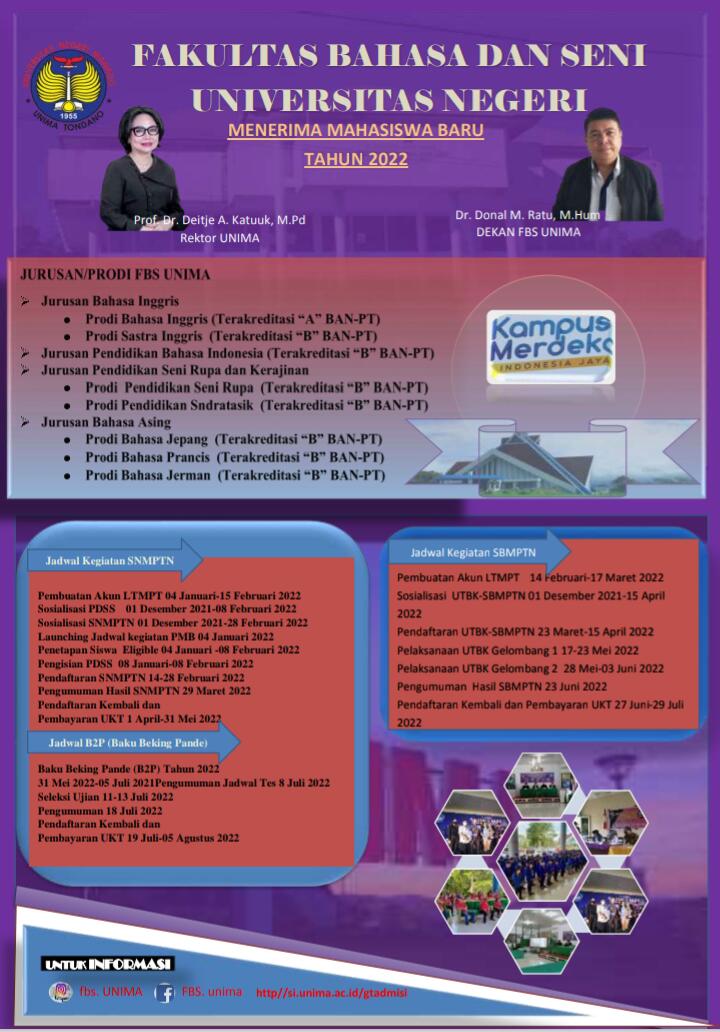 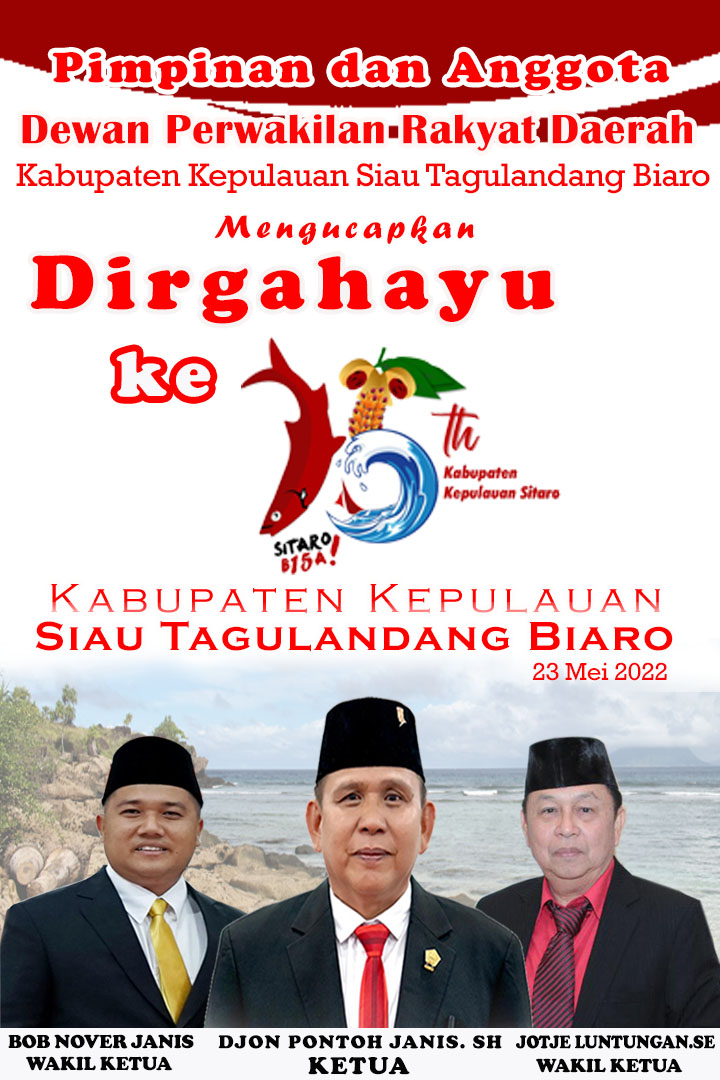 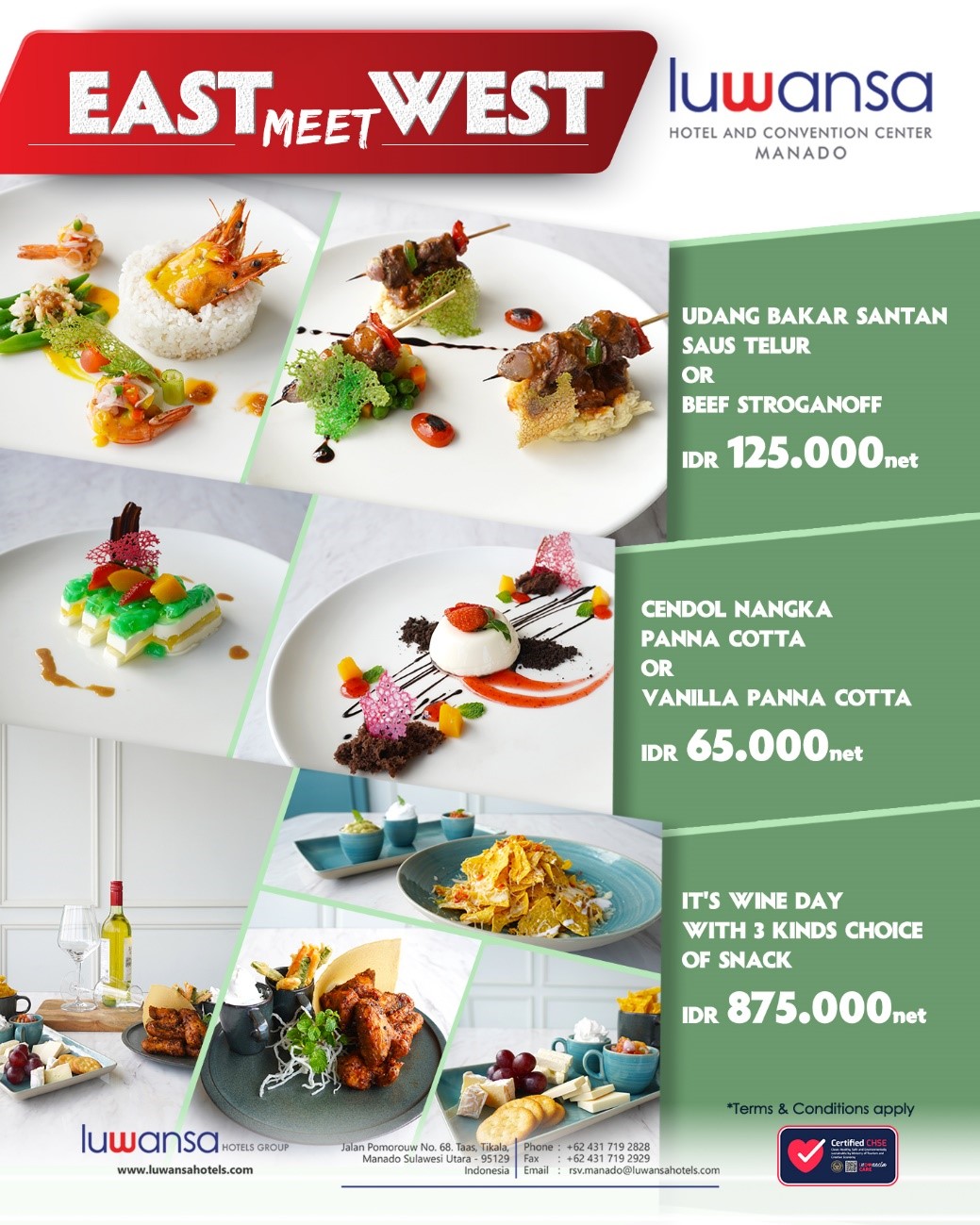 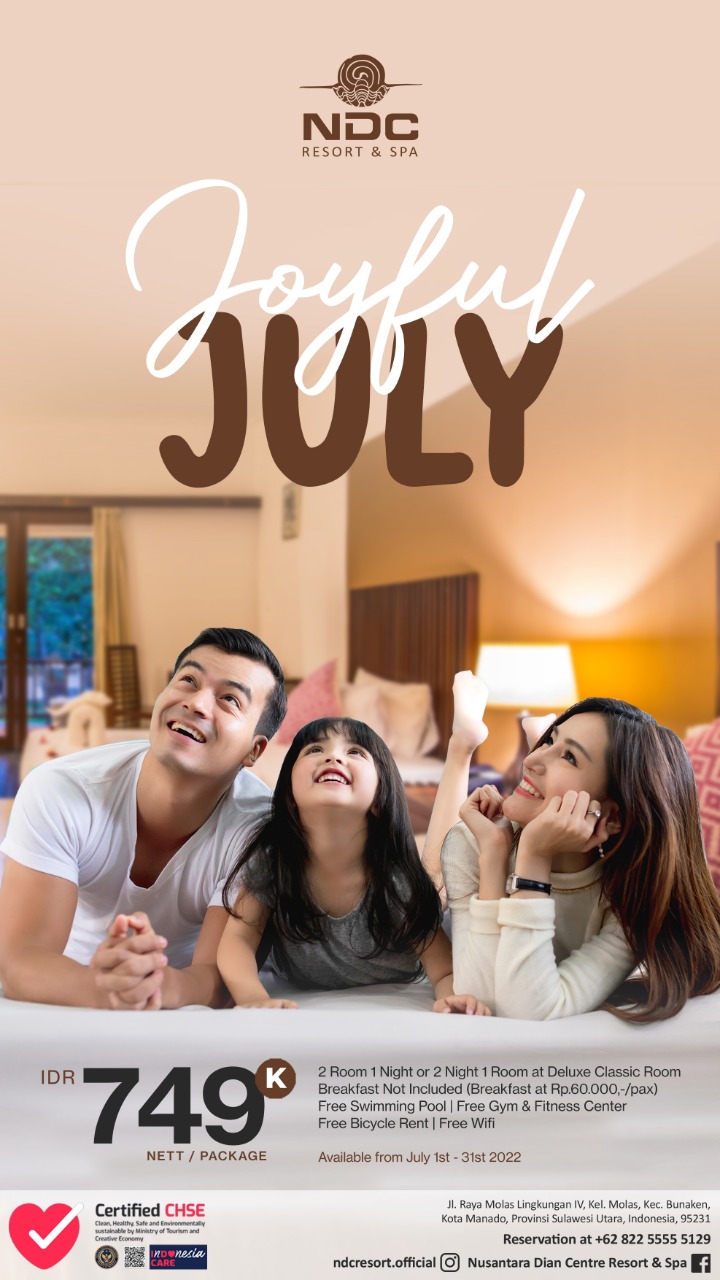 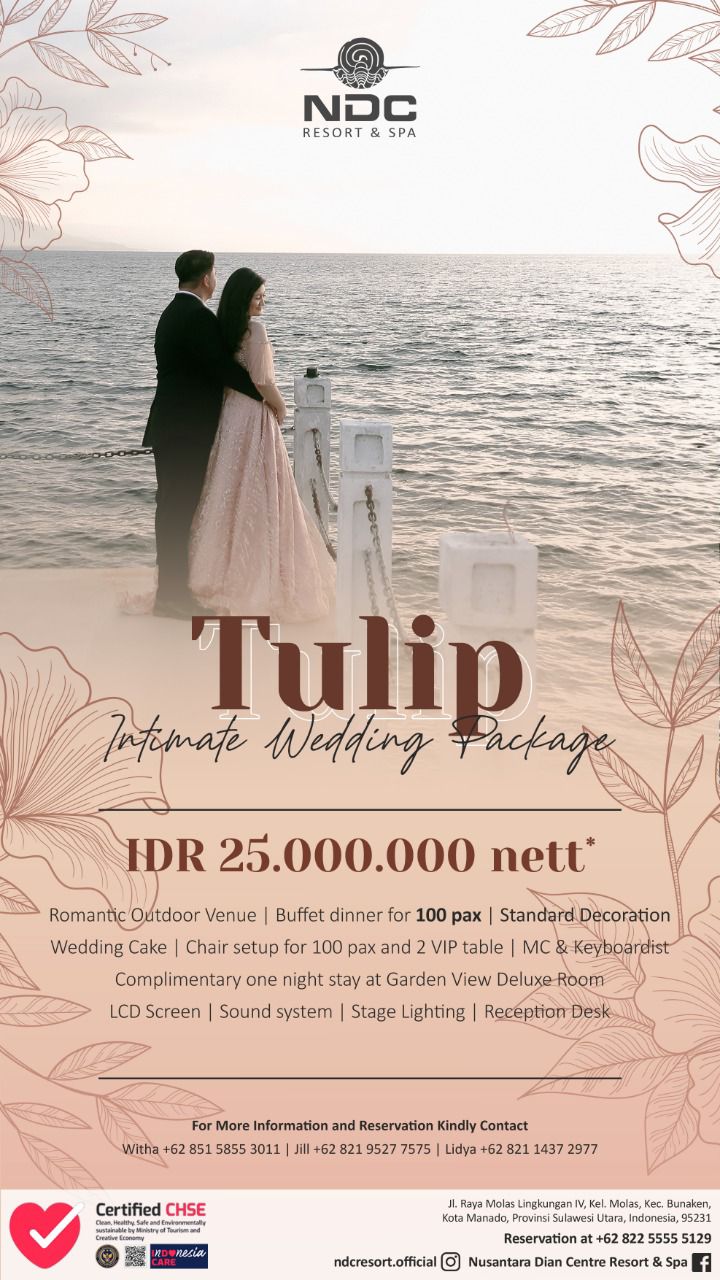 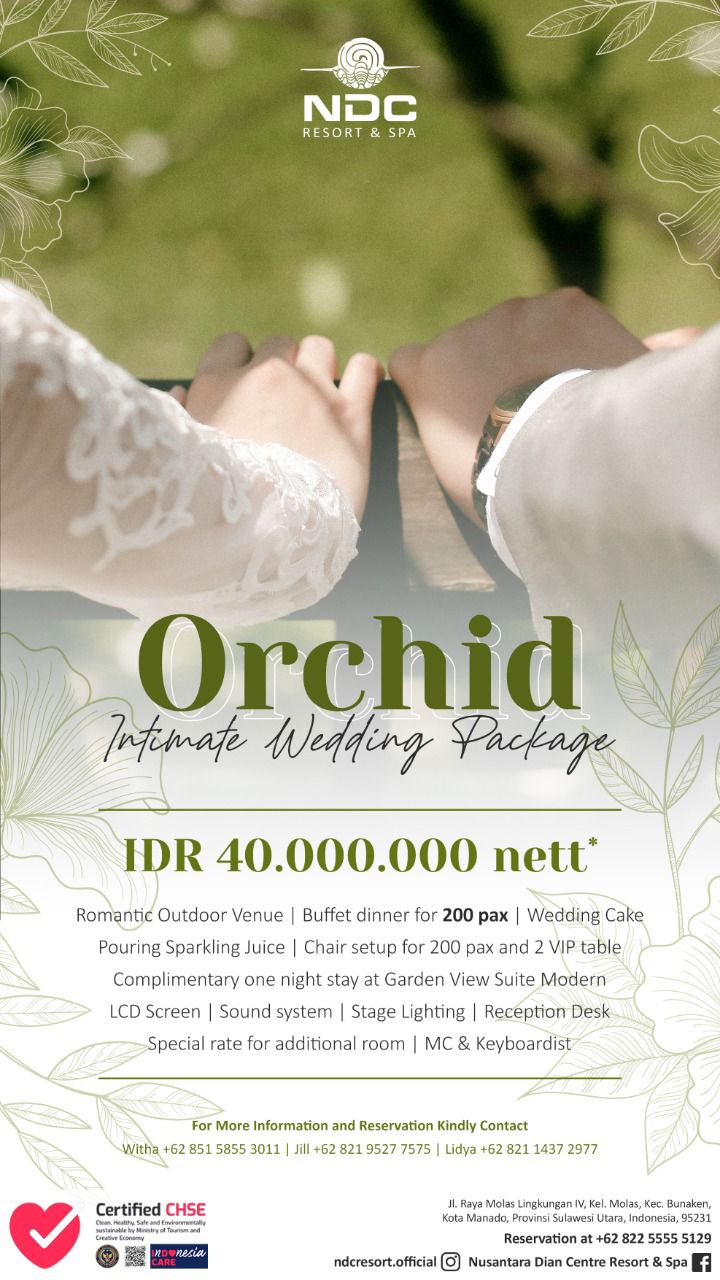 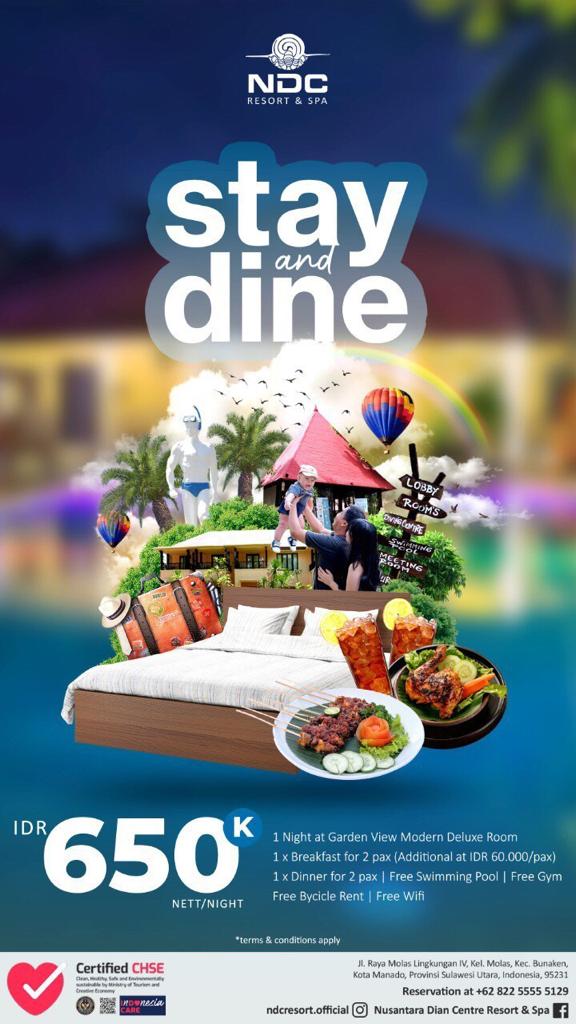